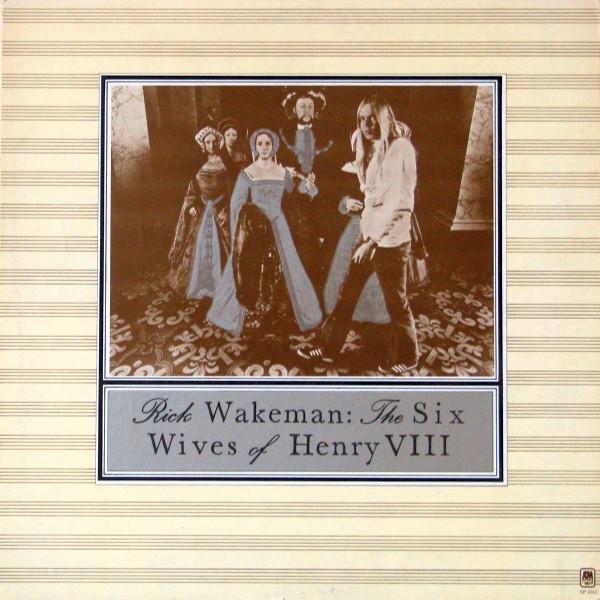 Rick Wakeman became famous as the genius keyboard player in Yes in the early seventies. Given his classical training and compositional abilities, it was inevitable that he would develop a need to find expression outside of the band and lay down the ideas that were flowing like the proverbial tidal flood at that time.

And so the best example of “baroque rock” came into being. I say baroque because it’s obvious but there’s many other influences. For example, when he plays just piano there’s more than a hint of Mozart in there.

The album consists of six tracks, each loosely representing the lives and characters of the six wives of Henry VIII. The opening Catherine Of Aragon is bold and decisive, jumping from one thing to the next, driven mainly by the piano, the second, Anne Of Cleves exhibits an extended series of magnificent solos using the Hammond organ. Catherine Howard, exhibits both modern and classical influences. Track four is Jane Seymour, a baroque pipe organ tour de force, slightly repetitive but nonetheless powerful. Anne Boleyn displays the Mozart style virtuoso piano playing, the final track Catherine Parr closes the circle with bold and decisive strokes.

There were many more masterpieces to come but this album is the master at his finest.

Now here’s something I’ve just recently learned. At that period in history it was not uncommon for bands to sign record deals, take a huge advance then break up, thereby voiding the contract, but then reform under another name. Some record companies got wise to this and inserted a clause in the contract that stated that even if the band broke up, the company may still call on any individual member to produce a record for them.

You may know that prior to Yes, Rick was in a group called The Strawbs. That group signed a recording deal with A & M Records. The recording contract including the break up clause. Well, the band broke up and Rick joined Yes. By 1973 Yes was gaining a following in the USA when A & M decided to take advantage of the band’s popularity and called on Rick to produce a record for them. Rick was still contractually obligated and so he proceeded to record his first solo album, The Six Wives of Henry VIII.