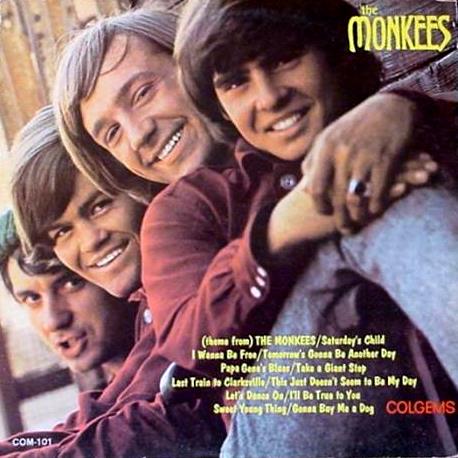 As if my selections to this point weren’t controversial, I will now include the one band which many do not regard as an actual band. No matter, I grew up with this group and have continued to listen to them throughout my adult life. Why? Because they recorded some of the best pop songs ever and the T.V. show was heaps big fun. Put aside the musical battles, the legal battles, bruised egos and whether or not they were genuine musicians (they were, by the way), just enjoy the music for what it is, great sixties pop.

I selected their debut album only because it launched them like an ICBM. But the truth is all of their albums were sketchy affairs with a few brilliant songs and, as Mike Nesmith once said, “the rest is just junk” (harsh!). To get a true flavour you would have to listen to all of the first six albums featuring the four members up to Head (1968) which encompasses their two seasons on T.V. and the subsequent feature length movie. That’s six albums in a little over two years!

The entire first side is required listening. Every track is a pop masterpiece. After opening with the show’s theme song comes Saturday’s Child, I Wanna Be Free, Tomorrow’s Gonna Be Another Day, Papa Gene’s Blues and Take A Giant Step.

The second side opens with the debut single Last Train To Clarksville, released before the T.V. show had started and was an instant hit. There’s been much discussion about this song over the years. I did some research and discovered a number of towns in America called Clarksville but there’s one that had an army base in the sixties. Knowing this suddenly gives the song new meaning. Side two also has Sweet Young Thing.

The second album, More Of The Monkees (1966), has a similar mix including such masterpieces as She, Mary Mary, Steppin’ Stone, Look Out Here Comes Tomorrow, The Kind Of Girl I Could Love, Sometime In The Morning, I’m A Believer.

Headquarters (1967), recorded between seasons of the T.V. show and their first album recorded “as an actual band” has gems such as You Just May Be The One, Shades Of Gray, For Pete’s Sake and Randy Scouse Git. In addition to the single released around this time by soon-to-be ex-producer Don Kirshner, A Little Bit Me A Little Bit You b/w The Girl That I Knew Somewhere.

Pisces, Aquarius, Capricorn and Jones (1967) has Love Is Only Sleeping, Cuddly Toy, Words, What Am I Doing Hangin’ ‘Round?, Pleasant Valley Sunday and Star Collector.

The Birds, The Bees & The Monkees (1968) has Daydream Believer (released as a single b/w the amazing Goin’ Down), Valleri and Zor and Zam.

The highlights on Head (1968) are The Porpoise Song, Circle Sky, As We Go Along. Listen closely to this last and see if you can figure out the time signature.

Surely on their own, Pleasant Valley Sunday and Daydream Believer would grant the Monkees a place in pop history.