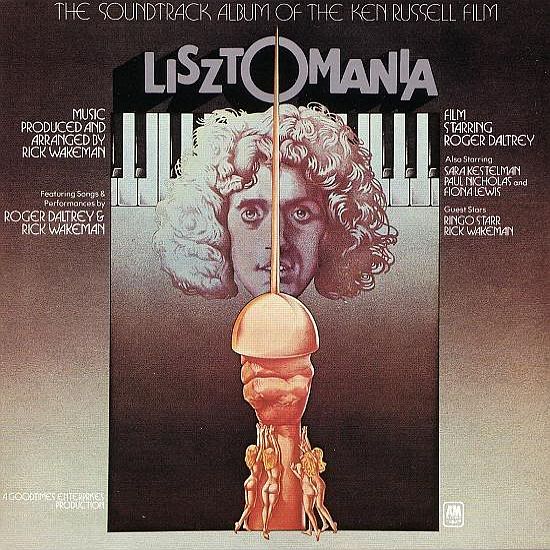 Ken Russell had just finished his enormously popular Tommy movie and decided to try his luck again with another music based psycho fantasy with Roger Daltry in the lead role. Second time around he asked Rick Wakeman to put the music soundtrack together.

The movie was almost universally panned (I’ve seen it a couple of times and they’re right) so it’s probably not worth your time chasing it up unless you enjoy really bizarre movies that make a point of not making any sense (Ken Russell is definitely an acquired taste, he’s either a genius or a crazy man). Maybe you should look it up and tell me what you think.

The one saving grace is Wakeman’s music. Much of it based on the music of Liszt and Wagner, much of it instrumental. Other contributors include David Wilde playing the classical piano pieces, Roger Daltry on vocals and also contributes song lyrics, Linda Lewis on vocals, Paul Nicholas (Cousin Kevin) on vocals, The National Philharmonic Orchestra and The English Rock Ensemble (Wakeman’s own band).

As you would expect, anything by Wakeman from this period could at least be loosely described as “progressive rock” but this is not anything you’re going to hear on Henry VIII or King Arthur. This runs the gamut from gentle piano music to way out there bombastic Wagnerian synthesizer weirdness. Wakeman fans for the most part hate this album and they even claim Wakeman hates it. However, I read an interview recently in which Wakeman stated that it’s not the music that he hates, it’s the way the record company butchered his music for the soundtrack album. There was a new release not too long ago which Wakeman likes better. I haven’t heard it yet.

Having said all of that, I really like this album and I listen to it a lot, probably precisely because it is so different to anything else I’ve come across.

Two favourite tracks are the opening “Rienzi / Chopsticks Fantasia” piano piece played by Liszt in front of a hall of screaming women which both celebrates his own music while taking the mickey out of Wagner (his supposed rival of the time) and the synthesizer gothic fantasy by Wakeman called “Rape, Pillage and Clap”.